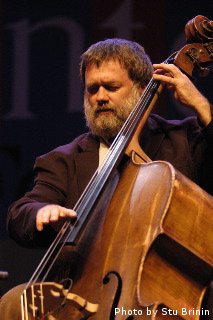 Bill Douglass was the artistic director of the Sierra Jazz Society from its inception, around 2005, until sometime in early 2020. Bill is renowned in the Bay Area and the Sierras as a fine bass player and bamboo flute player. I’ve never had the pleasure of making music with Bill but we’ve met and talked music very briefly.

When I came to the Sierras this summer I reached out to the Sierra Jazz Society only to find out things were winding down after fifteen years of great music. I offered to keep things going, along with David Clouse and Peter Wilson, two well known musicians from the area.

We’re making plans for spring of 2021 but, in the meantime, I wanted to get Bill’s bio info back up on the site. He and Nora Nausbaum are the folks that launched the SJS and, after doing some research online, Nora helped me out by forwarding this bio that was on the previous SJS website. I’m going to make a digital copy here with some links to content available on the internet so you can check out some of Bill’s work. If you have any additional content, links, stories, photos, etc. I’d love to see it!