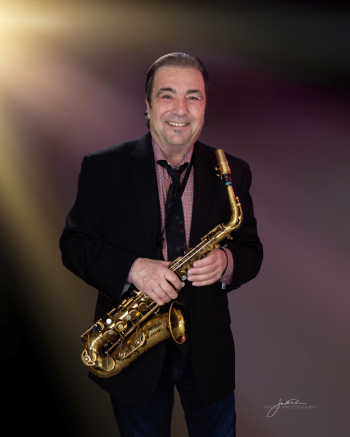 Sierra Jazz Society: Where are you from originally? What kind of music were you exposed to, and who were your first influences?

SJS: Early on in your career you played with Ray Charles. Can you talk about that experience?

Greg Abate: Playing with Ray Charles was a great experience. I was living in Los Angeles, California and I had left the gig with the blues band I was playing with. I was 27 years old at the time and I saw a notice that said, “Ray Charles, auditions tomorrow for the new touring band” so I went and auditioned.
I traveled all over Europe and the United States as a young man playing lead alto sax in the sax section with the Ray Charles Orchestra. I learned a lot from playing in that band and from the people in it. They were much older than me. Ray was very strict and very very passionate about his music. I was sitting right in front of him when he was playing and singing.

SJS: Even though Ray Charles is known for fusing different genres, it is a big jump to mainstream straight-ahead jazz. How did that come about?

Greg Abate: No it’s not. For me it was a continuation in the line of things. I came from playing in rock bands when I was a kid in resident blues in Hollywood, California where I lived. The roots were there for me and I learned to evolve through different musical experiences including this one.

SJS: Your playing is highly energetic, melodic, often up-tempo, and very rhythmic. Additionally, you play all the saxes, from soprano to baritone, and even flute. Who were your influences growing up and who did you emulate as a horn player?

Greg Abate: I liked and emulated many great players such as Charlie Parker, Sonny Stitt, Phil Woods, Dexter Gordon, Wayne Shorter, and other instrumentalists, giving a wider angle and vision on jazz improvisation from different styles of musicians. It still goes on. It never ends. Jazz is infinite in approach to what you play and how you play it. It’s not just play anything and make it up. So you hear people develop their solos like I mentioned and it’s a real story it’s not just a barrage of notes. You have to play the right notes in the harmonic framework of a song which has infinite possibilities. It’s not like being a surgeon where, if you make a little mistake, you might kill the person. If you play the wrong notes no one gets hurt.

SJS: In last year’s Down Beat magazine readers poll you came in 2nd place for alto sax players in America. You engage in collaborations more than most and have played with a lot of major players, including a notable album with legendary Phil Woods. With whom do you think your most successful collaborations have occured?

Greg Abate: Phil Woods, Richie Cole , Claudio Roditi , Jerome Richardson, Dick Johnson, who was leader of the revived Artie Shaw orchestra which I played tenor sax in 1986-1987. Dick was also a local mentor of mine in my early years in RI in Duke Bellaire’s jazz orchestra. One of the longest performing bands in New England for 30 years.  By the way, Artie Shaw was there in Boston the day I auditioned.

SJS: Speaking of collaborations, your latest record is a collaboration with Kenny Barron and is some of your best work. It has been a huge success reaching #1 on the jazz charts. How did this record come about, and has the recognition changed your collaborations or performances in any way?

Greg Abate: My first collaboration with Kenny Barron was my first recording with him in 1995 with Rufus Reid ,Ben Riley, and Claudio Roditi.  I was the leader on that date and the CD was called “Bop Lives“. I had not seen Kenny Barron for all those years until 2017. We were both playing in a festival in Camden Maine and, on the interval, I approached Kenny and we reunited and I asked him if he’d like to do another recording with me on Whaling City Sound Records!

SJS: You don’t show any sign of slowing down: What can we expect in the future from Greg Abate?

Greg Abate: I plan to keep touring and recording and playing in different parts of the world . I constantly am aware of how I’m playing my music and continue to be highly critical of my playing. I love to play and record but I do not like to hear myself a lot and never seeing myself in video or clips. I am always trying to be more satisfied in my live in the moment performances .
“My life is an Improvisation“

SJS: Thank you for your time. We look forward to seeing you at the Nevada Theater, and wish you all the best.